This week we are making something out of two materials. For my pcomp midterm we are adding joysticks to a game I built in ICM, so I decided to use this assignment to build a box for the joysticks and other hardware.

I had heard that cork was really great to work with, so I went to Home Depot to get cork, while there I found some peg board, which I loved the look of, so decided to get that as well. I got metal brackets and 1/2″ screws as fasteners.

I decided I wanted to have rounded corners to give the enclosure a bit of a retro feel, so decided to cut the project on the laser. The laser did a great job on the peg board (I cut it with the settings for hard wood), but it didn’t do such a great job with the cork.

I couldn’t find settings online to properly laser cut the cork, and everything I tried just lit it on fire. Eventually I decided just to etch it (which came out well) and then use the vector lines as guides to cut it on the saw with the thin blade (can’t remember this saw’s name).

The cork still didn’t cut so nicely on the saw, and didn’t sand nicely after that. It also caused some trouble with the screws and brackets. I think in the future I’ll stick to using it just for etching.

The holes in the peg board also caused a little trouble. They weren’t perfectly centered on the pieces I cut, so I had to install the brackets around them, which left the brackets unevenly placed. In the future I will plan better to make sure the holes line up in a more strategic way.

I bought some vinyl bumpers to stick on the bottom of the box, but it ended up balancing fine on the brackets without them.

I also bought something like Velcro to use for the top of the box, but the adhesive didn’t work on the cork. I ended up getting a strap hinge and a double roller catch for it. I’ll put those on once the electronics are in place. Hopefully they work ok with the cork.

I thought it could use a little color so I used acrylic ( oops! ) paint to make a red band around the lid. 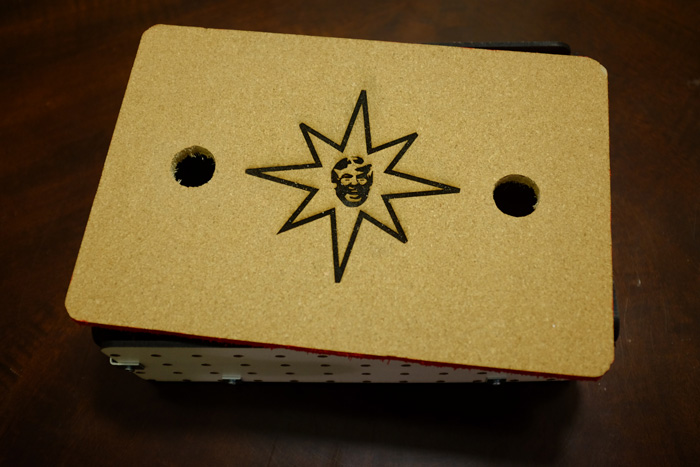 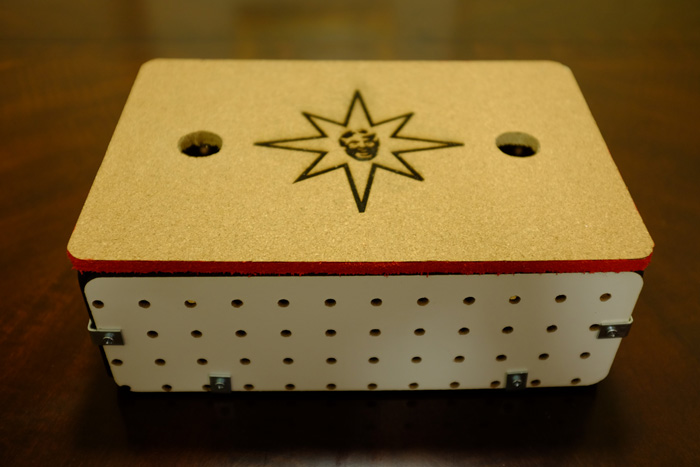