I’ve learned a lot in the process of creating my Piecing it Together midterm, the clock. Here’s a recap.

I haven’t worked much with wood or acrylic, so finding the right materials took a few tries. For the wood, I first decided to use poplar and to buy it at Metropolitan Lumber. When I got there, they only had a big piece that was too thin for my design and cost $50. I decided to try other options. I went to Home Depot and perused the lumber section. I didn’t find anything that would work for the project, but I did get a better sense of how I could talk about what I wanted. I then went to Blick on Bond St. They had less wood than I thought they would, but I did find some basswood sculpting blocks that seemed they would work with my designs. I forgot to take a photo of it before cutting, but here’s a link to it on their website. I know that basswood is a soft wood and not necessarily the best choice for the project, but I figured it would get the job done.

For the screen I had decided to use acrylic or vinyl, neither of which I’ve used before. I started with a thin piece of white translucent mylar and 1/16″ clear acrylic, but when I glued them together with spray adhesive I could still see the glue. I went back to Canal Plastic to take a second look at the white acrylic. I ended up with the 1/16″ translucent white acrylic. Originally I had thought this would be too opaque for my LCD to shine through, but on a second look, it seemed it should work ok.

The piece of wood that I found was a bit shorter than my original design, so I reworked my design to fit the wood. In doing so I decided to revert back to my original design with the decorative lines on the front. I drew and redrew my designs multiple times on the wood, then transferred the design to Illustrator. I drew separate designs for the front and the back.

When my designs were finished, I took them to MasterCam and the CNC. It’s hard to believe that I spent nearly seven hours over the weekend on the CNC. I ran into so many challenges, here are the highlights:

The first issue that I ran into was that my bit wasn’t long enough to route my back pocket. I needed about 1.5″ depth in the pocket, the total length of the bit was 2.5″, but when I put it on the CNC, the bit was too far up the shaft. The collet hit the wood. I stopped the machine right away. I thought that maybe I could just lower the bit and zero the machine to finish the job, but no one in the shop at the time knew if that was a good idea, so I decided to abort because someone was waiting for the CNC and I didn’t want to risk breaking a bit.

The next day, I was able to solve the pocketing problem by just putting the bit lower in the shaft. I also ran into some other issues. First, I wasn’t sure how to use two different bit sizes. Luckily someone was around to show me how to do that in MasterCam. Then, I had a problem pocketing, because my bit size, although it was set to 1/4″ was set to a cutting size that was bigger than the bit. Once again, to my luck someone in the shop helped me sort it out. It turns out there is a 1/4″ straight bit setting saved in MasterCam that messes a number of people up.

Finally, as I was getting toward the end of the back pocket, the screws holding my wood popped out and the wood jumped up on the bit causing a big gash in the pocket. I hadn’t wanted to screw into the bed of the CNC, so I used screws that only went about 1/4″ deeper than my wood. Unfortunately the board on top of the bed is in such bad shape that one of my screws was partly in a hollow of that board and it eventually broke free, causing my piece of wood to come loose. I re-secured the board with longer screws.

I was able to finish the job, but the final piece does have a visible little love bit from the CNC.

From there I used the laser cutter for my acrylic and the vinyl cutter for the mylar (which I ended up not using). I used fast drying epoxy to mount the screen, and small screws to put on the back. I was surprised to see that, despite the very small amount of epoxy that I used, a little of it crept around the sides of the screen and dripped on the back panel.

I’m happy with the final piece. I learned a lot and it’s great that I now have some experience with the CNC techno router. 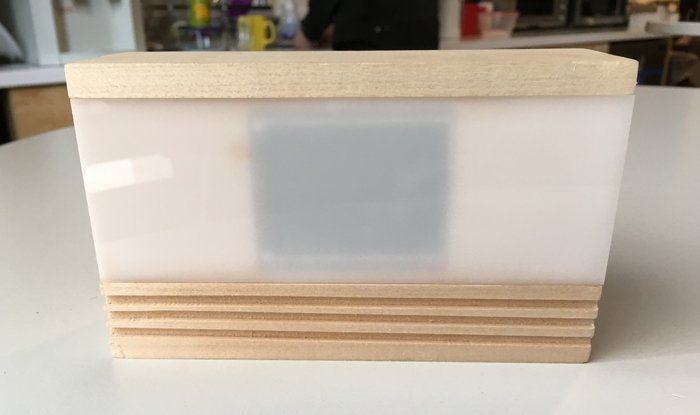 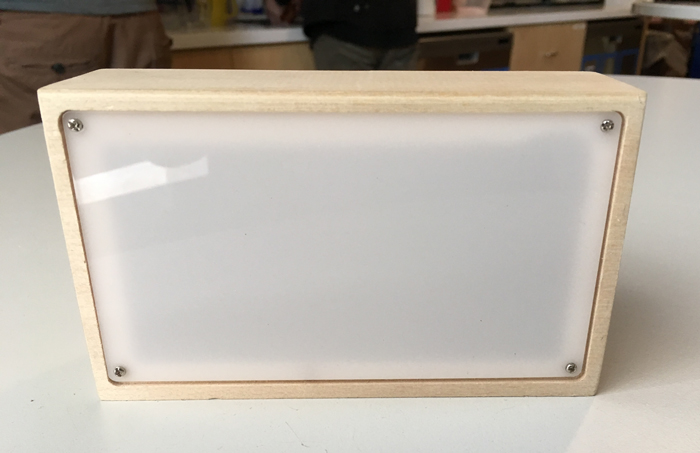