This week’s Live Web assignment: Find a live or synchronous site or platform online. Try it out. Describe it on your blog. How is it used? What do you find interesting about it?

I found twitch.tv. Of course, I’ve known that twitch existed, but I guess it’s suffice to say it just didn’t seem like my cup of tea. So, I never spent time on it.

In brief, it’s a place where people stream video—often live, but other times not—and people chat about it. People playing video games are really popular. I watched one or two of those, then went over to the “creative” channels and watched some Bob Ross with a few thousand people. Then I watched a young artist do some sketches with just 100 people. Then I discovered Deadmau5 making music live in his studio. 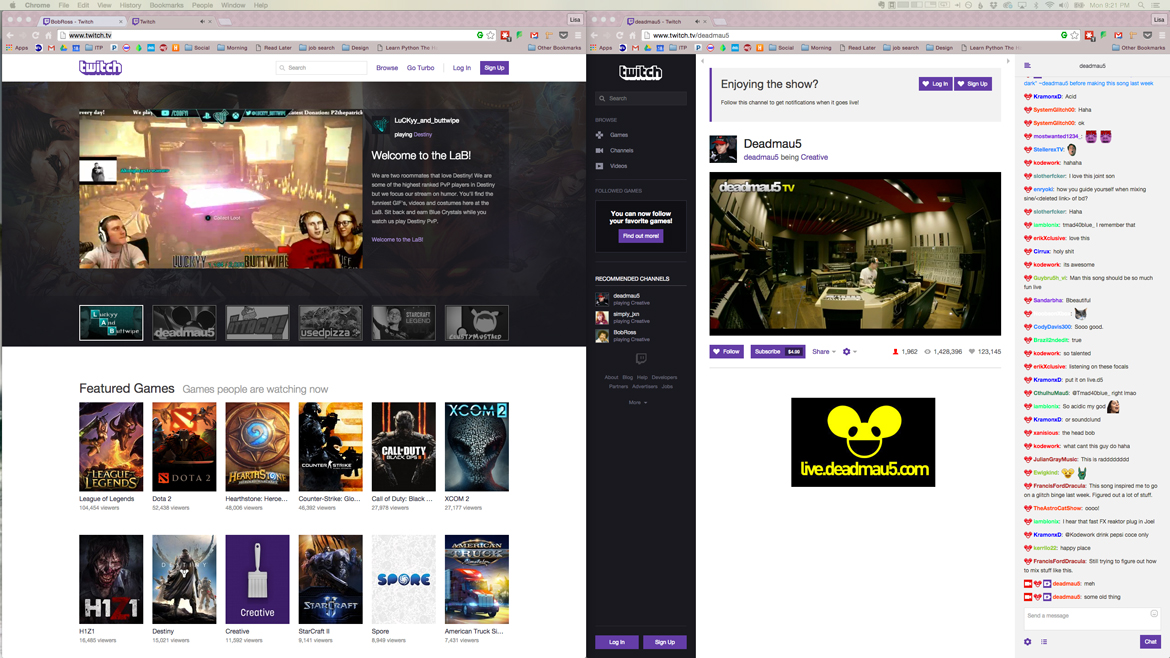 The first ones made me smirk a bit, but really didn’t do much for me. Tuning into Deadmau5, though, actually made me think for the first time that this may be my cup of tea after all. I really love live music, and listening to music while I work, so the feed was actually something that I could put in the background while I wrote this post. I could take or leave the comments—which are every bit as ridiculous as you would expect them to be—but I have to admit, there is something interesting, even *entertaining* about peeking at them once and a while.

For a minute there, with my Deadmau5 on one screen and Welcome to the LaB playing Destiny on another, while I wrote my blog post on the third, I thought: wow, I could get into this. Ten minutes later I felt like my brain was going to explode and had to turn everything off. Still not my cup of tea, I guess. Ha.

But what I did realize as I was watching all of this, is that I may have to go back on what I wrote last week about streaming video trends. After diving into twitch, I may now be leaning on Steven Levy’s side after all.